facebook
Email
Pin It
gplus
Reddit
***
Digg
twitter
Gshare
Welcome to the "SatAM Secret Vault"! This portion of the site contains all of the rarely-seen content from SatAM Sonic. Most of the content on this page is hard-to-find, and are things you'd never find by watching the show itself, and shows some behind the scenes making of SatAM! We still ask YOU DO NOT TAKE THESE PICTURES AND IMAGES for your own site, without permission. You can ask permission by shooting an email to admin AT mobianlegends.com with the subject "MobianLegends - Can I Borrow your Secret Vault Material?".

This is a copy of the SatAM Bible. It's not the first bible, and it's obviously not anywhere near the last. This bible contains the original name for Snively (Quizley), says Antoine's accent is British (not French, as we know it is), and talks about Nate Morgan. Yes, Nate Morgan of the Archie Sonic the Hedgehog comics series was originally a SatAM character! However, perhaps it's for the best that they decided to change things the way they did, or else we would have had another AoStH. I mean, as much as I like AoStH, we don't need two series of it.

Interesting to note that on Page 10, whoever was marking on the sidelines (probably its author, Len Janson) mentions a game ("Will not appear in game. He [Tails] rolls up instead.") I didn't notice it at first, but I remember hearing rumors about a game called Sonic Mars that was to take place in the SatAM/Archie world; perhaps this was a reference to this game... OR the more likely answer, since it was revised before Sonic 2 came out, it's Sonic 2 that they're refering to. It's entirely possible that Len could have been referring to the Sonic-16 demo that was made (as it was based off SatAM, and would later evolve into Sonic Mars).

The last thing to note is on the last two pages there are story ideas. The Quest obviously later on became Sonic Boom, Heads or Tails became... well thats obvious, but the original concept is different. As for Bug Off, it either evolved into two seperate episodes, Harmonic Sonic, Sonic Past Cool (the spying on Knothole, and someone wanting to keep a pet), or the idea was scraped all together.

Do Not Take for your Own Site Without Permission!

An "Animation Cel" was sent to us recently by user "Denn". His story is this:

This story seems to fit. The characters are in their "Season 1" appearance, and Cluck is present. Were this made during Season 2, we'd probably have Season 2 Rotor, Sally with a vest, and Irises in their eyes as opposed to being a solid color. I would say this probably hung in some important hallway in DiC with other such cels of thier shows, as offices as such sometimes have. Below are Low-Quality and High-Quality Versions of this cel. 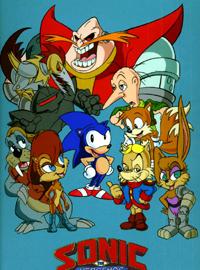 SatAM Transcripts are slowly getting here! A Transcript is like a normal "script" except without all the cues, and scene descriptions, and rather just the dialogue of something. You can help by...

Introduction to SatAM Sonic's Cancellation The late 1980s and 1990s saw a resurgence in animation, with both Disney and Warner Brothers leading the way with a renewed energy not seen in a long...

Benjamin Hurst 1951—2010 It is our unhappy duty to report on the passing of our dear, beloved chief writer of SatAM. Benjamin Hurst has died at the age of 59. The cause of death was reported to be a...

SatAM is perhaps best-known for airing on ABC in the United States of America, but it also aired on several other channels around the world after its initial run in the 1990s. This page will list...

SatAM Sonic Episode ListThis page contains the full list of all 26 episodes of SatAM Sonic the Hedgehog, as well as brief synopses of each episode. Eventually, the episodes will act as links to...